After winning the Nobel Prize for Literature in November, 1936, Eugene and Carlotta O’Neill moved to the San Francisco Bay Area. There, they decided they needed a quiet environment in which Eugene could write with good weather and access to doctors. The pair took the $40,000 prize money from Eugene’s Nobel Prize and purchased 158 acres of the former Bryant Ranch in Danville. The land, house and furnishings cost around $100,000. A long driveway, fencing and a gate helped provide them with total privacy in the context of serene, natural surroundings. As a reflection of his interest in Oriental philosophy and her focus on style, they named the place “Tao House” which means in Chinese (as interpreted by the O’Neills) “the right way of life.” Tao House was located above the San Ramon Valley in the Las Trampas hills with a clear view of the 3849-foot Mount Diablo. 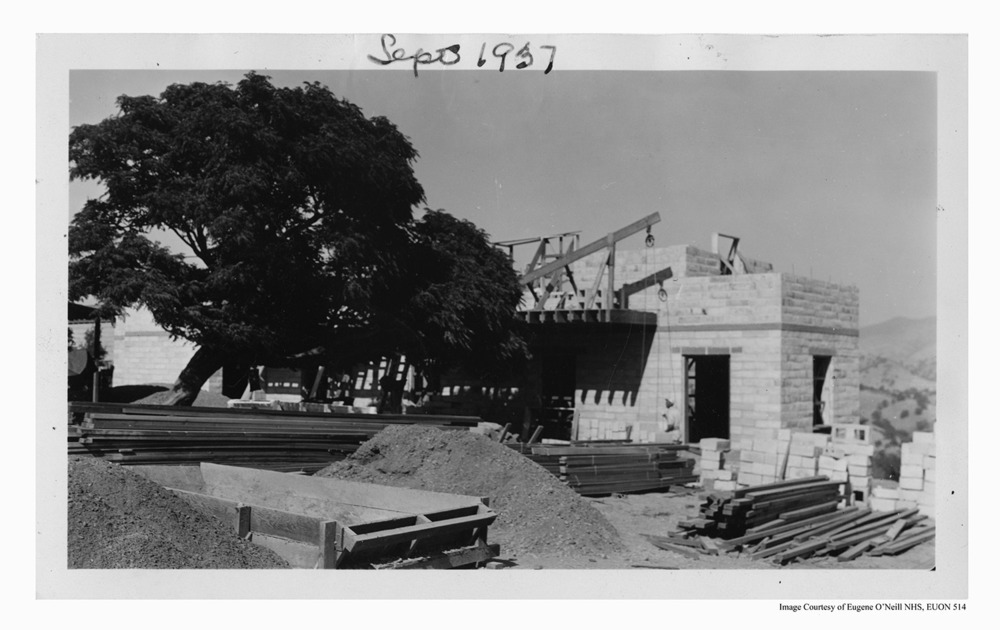 The house was built using a combination of Chinese and California ranch motifs. No documentation exists showing that the O’Neills knew of the feng shui practices. Yet, their home contains numerous feng shui elements. It had heavy basalt brick walls, a roof of black colored tiles and doors which opened out to several porches and patios. Inside, the dark blue ceilings and colored mirrors provided the chic look Carlotta wanted.

They planted Gene’s favorite star jasmine and hawthorne, along with redwood trees to screen the pool, and walnut and almond trees. The O’Neills raised white Brahma and other varieties of chickens, including a rooster dubbed Sugar Ray Robinson. “Blemie,” their beloved Dalmatian, liked to roam and sometimes wandered as far as downtown Danville.

From his study O’Neill could look west to the courtyard, barn and the oak-studded hills. Eastward, walnut and fruit orchards stretched across the valley to the Mount Diablo foothills. The water of the Carquinez Strait could be seen to the north. On September 14, 1937 he wrote to Barrett H. Clark:
“We have a beautiful site in the hills of the San Ramon Valley with one of the most beautiful views I’ve ever seen. This is the final home and harbor for me. I love California. Moreover, the climate is one I know I can work and keep healthy in. Coastal Georgia was no place for me.”

Danville was a small town and the O’Neills’ contacts with town folk were few in the early years. Tao House was known to the local residents, of course. They knew about O’Neill’s fame and couldn’t miss the large white house and chauffeur-driven car.

Carlotta protected O’Neill’s writing time by controlling correspondence and regulating visitors. Scholar Travis Bogard characterized the walls surrounding O’Neill as providing a “moat of silence” which enabled him to write. Carlotta was devoted to her husband and worked to protect him from unwanted interference.

O’Neill wrote his last and greatest plays at Tao House. When he was well enough he worked steadily on several plays, including an ambitious planned cycle of nine (and later eleven) plays. Only two of the cycle plays survive: “A Touch of the Poet” and “More Stately Mansions,” which was never finished. In 1939 he completed “The Iceman Cometh” and began “Long Day’s Journey Into Night.” In 1941 he began “A Moon for the Misbegotten” and the one act play, “Hughie.”

He suffered from neuritis, depression, periodic flu attacks, prostate problems and hand tremors (then diagnosed as Parkinson’s Disease). Nevertheless, O’Neill worked regularly, sometimes from early morning into the evening. He re-wrote and revised his plays repeatedly before he was satisfied with them. His handwriting became smaller and smaller as the tremors increased. While in Danville, Carlotta and her daughter Cynthia Stram typed manuscripts for him, using a magnifying glass to decipher the words. He tried dictation and typing but could only create by putting pencil to paper.

A revolving door of cooks and servants and the O’Neills’ increasing health problems eventually forced them to leave Tao House. They felt marooned and Carlotta could no longer manage the house. In December of 1943, O’Neill wrote to Saxe Cummins: “We’ve put the rancho up for sale. Too much of a burden and worry. It has us licked.”

They sold the house to the Arthur Carlsons and moved to a San Francisco hotel until the war ended. Carlotta later recalled: “We stayed at Tao House for six whole years, longer than we lived anywhere else. Of course, there were many hardships, but it was a beautiful place and I hated to leave.”

O’Neill had called Danville his final home and harbor and, indeed, it was the place where he successfully completed five significant works: “A Moon for the Misbegotten,” “The Iceman Cometh,” “Hughie,” “A Touch of the Poet” and “Long Day’s Journey Into Night.” Tao House and Carlotta’s protection facilitated this final burst of creative energy.

After leaving Tao House he never wrote another play.

The Tao House is open for tours Wednesday through Sunday by appointment only.

Reservations are made through the National Park Service.