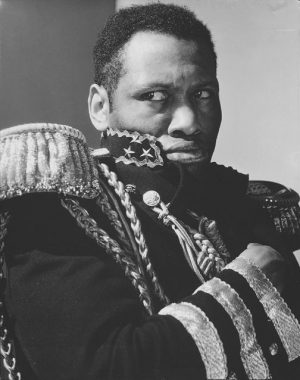 On November 1, 1920, the Provincetown Players and Eugene O’Neill became overnight sensations with the premiere of O’Neill’s play The Emperor Jones. The play’s premiere was significant in two ways. For the first time in mainstream American Theatre, there was a production featuring a full commitment to the principles of the Art Theatre movement. The Art Theatre movement embraced the use of expressionism to go beyond the limits of the literal and delve more deeply into the subjective world of human experience. Audiences got to view the world of the lead character filtered through his emotional state and psychological perception. The world of modern psychology had finally entered the world of the American Theatre.

The play focuses on the downfall of Brutus Jones a fugitive from justice who cons the natives of a small West Indies island into making him their Emperor. In the play’s first scene, Jones learns that the natives are going to rebel against him and he must leave the island immediately.

With a “bending” of reality to fit the psychological state of the fleeing Jones, Eugene O’Neill, director George Cram Cook and the Provincetown Players unleashed a frenzy of creative possibilities. Immersion into the psychological allowed the production, and subsequently the American drama, to reach for the fantastical in its efforts to shed light on the human condition.  Fears manifest as nightmarish visions and fantastic ghostly visitations that haunt the desperate and exhausted Jones as he runs for his life. Dangers from his past are mixed with dangers of the present in a potent cocktail of terror. The literal drum beat of the natives pursuing Jones morphs into the ever-increasing beat of his racing heart as he tries to outrun his fears and guilt. The Emperor Jones burst onto the scene as the American Theatre’s first psychological thrill ride.

The Emperor Jones broke ground in a second way. It was the first time an African American actor played the lead in an American drama. Charles Gilpin brought a power and dignity to Brutus Jones that was new and exciting. His grounded and fierce performance served as the perfect counter-balance to the fantastical images that appeared throughout the play. Gilpin was recognized by the Drama League of New York as one of the 10 people who had done the most for the American Theatre in the year 1920. However, controversy arose when he was not invited to the awards dinner because of the color of his skin. After a protest led by Eugene O’Neill and other prominent members of the theatre community, the Drama League reconsidered its decision and extended an invitation to Gilpin.

The initial Broadway run of The Emperor Jones ran for 204 performances and was followed by an extensive two-year tour of the United States with Gilpin as the lead. In 1924, when organizing a revival, O’Neill broke with Gilpin over his constant changing of the play’s language. Gilpin insisted that the word “nigger” would not be spoken by a black man while O’Neill felt it was consistent with the play’s dramatic intent. Gilpin’s troubles with alcohol also fueled O’Neill’s belief that Gilpin could not be trusted with his play.  While Gilpin acknowledged that O’Neill was the plays author, he felt that the role of Brutus Jones had been brought to life by him and he had license to change the words as he saw fit. In Gilpin’s eyes, he was “The Emperor Brutus Jones!”

O’Neill’s replacement for Gilpin was a little known singer, Paul Robeson. Robeson played Brutus Jones to great reviews in the New York revival and the London production that followed. In 1933 when the play was made into a movie, Robeson, whose star had risen with The Emperor Jones and the musical Showboat, was the obvious choice to play Brutus Jones.

Over the years there have been many revivals of The Emperor Jones, as well as an opera, a ballet and a couple of television adaptions including a 1955 version for Kraft Television Theatre featuring Ossie Davis as Jones.